A Useful New Model to Get The Edge in Public Relations

Public relations is changing in the blink of an eye.

There’s just one problem. Some Public relations practitioners and many PR clients are running a little behind.

PR for eons was laser-focused on earned media — placing a story in media outlets. The rallying cry of clients and executives was “Get us in the New York Times or Wall Street Journal.” And, "Better yet, get us on the front page.”

PR people would overturn every stone in an effort to do just that, wooing media and appeasing clients in the process. (Full disclosure: my B2B PR agency has done this).

Despite the changes, however, PR is still driven by earned media accomplishments. Visit most company websites and you’ll see brand-name media logos emblazoning the sites, emblems of a company’s reputation.

Public relations professionals (and here I include my agency) often chase the rainbows of top tier media —that special allure of The New York Times, Wall Street Journal, and other flagship media brands that clients want and agencies pursue.

Agencies' focus on earned media impacts the bottom line. Earned media accounts for the majority of PR agency revenues, according to the 2019 Global Communications Report, a survey of PR practitioners, students and CEOs by the USC Annenberg School for Communication and Journalism. And while it’s expected to decline in the next five years, it will still represent a sizable share, exceeding owned, shared and paid media.

Yet, the importance of earned media isn’t shared by the CEOs surveyed. Asked which communications strategies they will find most valuable to their companies in the future, the CEOs rated shared and owned media as the most valuable, at 38% and 36%, compared to 14% for earned and 12% for paid media.

As the world turns, does media relations as the holy grail make sense in an environment where there are 5 PR people to every 1 journalist?

Pitching today takes far longer than it did even a few years ago. You can’t simply send a note to a media person and expect coverage. In my agency, we typically need to call, email several times and in some cases reach out on social media to get a busy media person’s attention.

All of which hit home when I read a recent op-ed in The New York Times about political campaigning.

The article quotes Tommy Vietor, a co-host of the Pod Save America, saying “The communications team I was on in 2008 was almost exclusively designed to handle reporters. A communications team in 2020 is designed to go around the filter. Well over half if not three-quarters of the work it does is creating its own media, whether it’s live stream, memes, podcasts, whatever.”

The Eroding Distinctions Between Paid, Earned, Owned and Shared Media

While PR people spend a lot of time talking about the niceties of paid, earned, owned and shared media, the average consumer doesn’t give a whit.

“In five years, the average person will not be able to make a distinction between paid, earned, shared and owned media when they are consuming information,” according to the Global Communications Report.

Frankly, I find that disturbing in a world where truth is already corrupted by fake news.

How can PR change its media relations model so it still makes sense in a world of diminishing journalist numbers relative to PR professionals and a media landscape tainted by fake news?

A recent report by Onclusive, formerly AirPR, provides a solution.

Onclusive analyzed over 1.6 billion pieces of content published globally during 2018. Its 2018 Global Media Report concludes: “The numbers tell a story of a media ecosystem that continues to expand at an accelerated rate, and an ecosystem that is becoming increasingly democratized by a ‘long tail’ of lower tier publications.”

It discovered that “LinkedIn Pulse (LinkedIn’s self-publishing platform) generates more content and more engagement than many of the top traditional publishers combined.

LinkedIn Pulse ranked #5 on Onclusive's Top 50 media list based on the number of articles published. In comparison, the New York Times and Washington Post ranked at 14 and 11 respectively.

“Not only are there more than 100,000 daily LinkedIn Posts, but the content is being published directly by the most influential business leaders in the world,” the report notes.

“In the old days there were half a dozen media outlets that mattered, you had them on speed dial, they knew you, you them,” Sean O’Neal, president of Onclusive, told me in an interview. Today, digital and influencer media have democratized publishers, according to O’Neal. The industry has become massively fragmented.

Clearly, in terms of volume the pendulum is swinging to Tier 2 and Tier 3 publications and to non-traditional tier 1 outlets such as LinkedIn and Medium.

What does that mean in practice?

O’Neal shared with me the story of two technology companies. Each used Onclusive’s proprietary metrics to track how much website traffic and conversions a piece of content drives. One technology company discovered that a Forbes article about AI-driven applications, which mentioned the company, drove the most website activity. The other technology company found that a blog post mentioning the company on Technori, a Tier 2 blog about marketing best practices for startups, was its top driver.

The bottom line: You can’t prejudge which outlets will be most effective. The key is measuring outcomes.

This isn’t to suggest that getting in top tier media is bad. Far from it. It’s just more difficult to achieve and not always cost-effective.

The takeaway: Don’t assume that top tier traditional media outlets are your saving grace. In some cases, lower tier outlets or high tier platforms like LinkedIn and Medium will perform better.

Top tier media still carry a wallop in terms of prestige, SEO and credibility, especially in terms of fake news. The recent Cision State of the Media Report found that 59 percent of U.S. consumers said fake news is making them more skeptical of what they read and see. The imprimatur of a major brand lends credibility. The credibility issue is even worse on social media according to Edelman’s Trust Barometer, which found only 30 percent of Americans trust what they see on social platforms.

A Hybrid Version of Earned and Owned Media

What’s often ignored in the rush to earned media is a hybrid version of owned and earned media. I’m talking byline articles placed in media outlets. With fewer journalists, many outlets (especially Tier 2 and Tier 3 media and even some  Tier 1 media), are hungrier than ever for good content. My B2B agency typically spends a large part of our day writing and placing byline articles. Blogs like HubSpot and Adobe’s CMO.com, for example, have a large readership and high domain authorities.

Jumping Into a New Revenue Model for PR

Meanwhile, some PR agencies are taking a giant leap forward. The global communications company Edelman recently announced a new focus on “communications marketing,” to include integrated creative campaigns driven by paid, earned, owned, and shared media. The firm says it's on track to bring in $1 billion in annual revenue within the next year and a half.

“Public relations continues to be the essence of our business; we explicitly do not wish to replicate the advertising agency model. But we now can be a client’s primary communications partner, bringing ideas that are earned at the core, social by design, and work across earned, owned, shared and paid channels. With our insight, intelligence and independence, we help clients create campaigns and movements that earn attention and trust, drive sales, and make meaningful change for society.

"....The mainstream media is still vitally important, but so reduced in headcount that it has impeded our ability to deliver results. There are broader expectations of companies and brands to speak up on issues of the day, from sustainability to innovation."

What does all this mean for PR professionals today?

Here are 4 key ways to fail-safe your PR:

How are you changing how you do PR? Please share your thoughts in the comments. 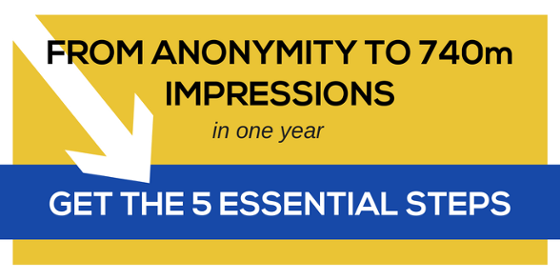