What the heck do journalists want?

That's a question many a harried PR professional has asked. Unfortunately, the relationship between PR pros and journalists can be fraught with each side wondering what's wrong with the other.

How can public relations pros and journalists work better together? Read on to learn how to adapt your PR strategy to the needs of journalists in your industry to get the best results.

The 2019 State of the Media Report from Cision is out -- and it sheds light on what journalists want from PR pros.

An Eye-Opening Look at The State of Journalism

We've always known that today's journalists are overworked -- but I don't think many of us truly appreciated the extent of the problem.

Consider: a third of journalists globally reported producing an average of 7 articles per week. And 42% of journalists reported having no more than a day to work on a story.

Let those numbers settle in for a second.

Journalists are under a lot of pressure to not only produce articles, but also engage their audience on a regular basis. With such demands, it's no wonder that journalists have a precise picture of what they want from their PR counterparts.

PR pros need to be on the ball, having a story that is ready-to-go and which meets all the needs of the journalist who receives it.

The Fake News Frenzy Is Dying Down

As has been the case in recent years, Cision asked journalists whether the public has lost or gained trust in the media.

Everything considered, journalism has gained a lot of ground in the past couple years.

As noted in the report, journalists have worked hard at making trust their primary business model and focusing on the accuracy of the news that they report. These strategies have gone a long way in rebuilding the public's trust and approval.

But what about you as a PR pro or a public relations agency? What can you do to bolster your B2B PR strategy and build a mutually beneficial relationship with journalists? Cision asked and this is what journalists said....

What Do Journalists Want from Public Relations Professionals?

This is an across-the-board request. With the uptick in social media and the ease of visuals, it's no wonder that journalists need engaging visuals to support their stories.

When asked what the most engaging content was, 27% of journalists said images, 18% said infographics, and 13% said videos -- with live streams and GIFs trailing behind.

A modern press release needs to be visually stimulating. Visuals in your press release not only grab the attention of prospective journalists, but also supports the news you want to promote.

Discover ways that visuals could enhance your press release. Do you have facts and figures that could be displayed in  a graph or chart? Could you create a demo video to embed or link to in your product release? Do you have trends to capture in an infographic? Link your release to the infographic. These are just a few of the ways you can make your press release more visually appealing.

PR people (myself included) have our work cut out for us.

75% of reporters surveyed said that less than a quarter of the pitches they receive are actually relevant to their audience.

This cannot be overstated: Do you research. Learn all you can about the reporter and  his or her audience. Look at past news the journalist has covered and look honestly at how your news fits into the journalist's beat. If it doesn't, then seek  another journalist who is a better fit.

When compiling your pitch and press release, think about it from the perspective of the journalist. Show how your story is going to interest the reporter's audience. Line up an interview with a company spokesperson and/or a third party for added credibility to enhance and enliven the story.

65% of journalists said that they would rather receive a customized press release than one that is mass produced.

When writing a press release, don't just research the intended journalist, as important as that is. Understand the journalist's audience and the publication's coverage areas. What are the outlets' demographics? What kinds of articles get the most engagement? Craft each press release with the publication and audience in mind.

Industry jargon can weigh down a press release and make it virtually unusable for many journalists. Remember what we found out at the outset -- journalists have an incredible workload. If they have to stop reading your press release in order to google industry jargon, it's not worth their time.

Instead, focus on simplifying your press release to make it more accessible, especially to audiences outside of your industry.

If journalists have to scour your release in order to find a hook that will interest their audience, well...they're going to give up in favor of one that does.

Make it easy for the journalist and evident what your news hook is.

What is involved in a news hook?

First, a news hook is more than simply news. It fits into the larger picture and benefits more than just your brand.

For instance, your company might be bringing greener initiatives into the workplace. That's news, but you need to go farther. The hook would be drawing attention to the devastating effects of pollution and waste and how your company is poised to make a difference.

Look for the human aspect of your news and underline how it fits into the bigger picture of the world around us.

These points will undoubtedly fortify your PR strategy and help you to build a long-lasting relationship with journalists in your industry. It makes their job easier, which makes them happier to work with you and your brand. 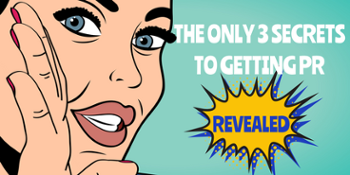